Becoming a Chief/Ya Alimamy was considered a Male thing in the Northern part of Sierra Leone. But with modernization and persistent building of consciousness from ActionAid and other partners, it is gradually becoming a thing to put behind us, as we do believe Women too have leadership qualities. Mameh Munu, Now YA ALIMAMY KAPEN, an activist whose capacity was built by ActionAid has become one of the Women that has changed the narrative. “It was not easy for me, but with the trainings on Women’s Right from ActionAid, I braved it to take the tittle” YA ALIMAY says.

Ya Alimamy has being very instrumental in the Masungbala Chiefdom. She was the chairperson for the mother’s Club that ActionAid formed and is also the Head teacher for the Primary School in Masungbala. With her engagement, she formed Women into groups and were able to monitor and create byelaws in the community for parents not sending their Children to School “I have to stand firm against them for I believe that Education is very important and if ActionAid has shown us the light we must follow” she added.

Becoming a Ya Alimamy has always been a dream for her, she believes that being at the helm of decision making in the community, the issue of Women and Girls will be championed “Now I have the power to advocate for our women and girls, as I now sit at the decision body in Masungbala”. Ya Alimamy Kapen is among the 7 Ya Alimamys crowned, this is a big leap when it comes to the issue of women holding such titles. ActionAid remains committed in building the capacity ad resilience of these women so that they can challenges structural barriers that impedes women participation in Governance. “I am very grateful to ActionAid for what they have done to me and my community” Ya Alimamy Kapen concludes.

Ya Alimamy Kapen first from Left Pose with Newly Women Ya Alimamys.
Jonathan Bundu/Actionaid Sierra Leone
ABOUT THE AUTHOR 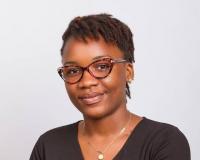 Jonathan Y. Bundu  is the Communications and Campaigns Manager for ActionAid Sierra Leone